Naturally Enhanced for Your Health. 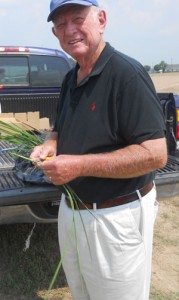 Blanca Isabel is a new high yielding, early long-grain rice variety. It was derived in 1998. The Blanca Isabel variety has a dark purple/ black bran layer. It is unusual in that the color is not restricted to the bran layer, but extends into the endosperm of the grain so that when milled the kernels retain a purple to lavender color, depending on the degree of milling. The Blanca Isabel variety has a long (9.98mm) grain that is purple/black and slender (width = 2.36mm). Its length/width ratio is 4.23 compared to 3.65 for grains of Cheniere rice. The color is due to the anthocyanin compounds in the kernels. The primary anthocynanin compounds in Blanca Isabel are cyanidin-3-O-glucoside and peonidin-3-O-glucoside. These compounds are bioactive and have been recognized as health-enhancing substances due to their antioxidant activity, anti-inflammatory, anticancer, anti-atherogenic, and anti-hypoglycemic effects. Blanca Isabel is the only purple kernel variety available in the United States that has American long-grain quality.
All rights to the breeding line that became the Blanca Isabel variety were released by the Louisiana State University Agricultural Center to Dr. M.C. Rush following his retirement.

About 115 acres of the variety were grown at Rayne, Louisiana and harvested in late August.

Show your team colors with purple rice (The Advocate) http://theadvocate.com/features/food/3040543-123/show-your-team-colors-with

We currently only sell packaged milled purple rice; however, if you are interested in buying rice in bulk or for use in another product (beer, oil, animal feed), please contact us at: tarush@purpleblackrice.com